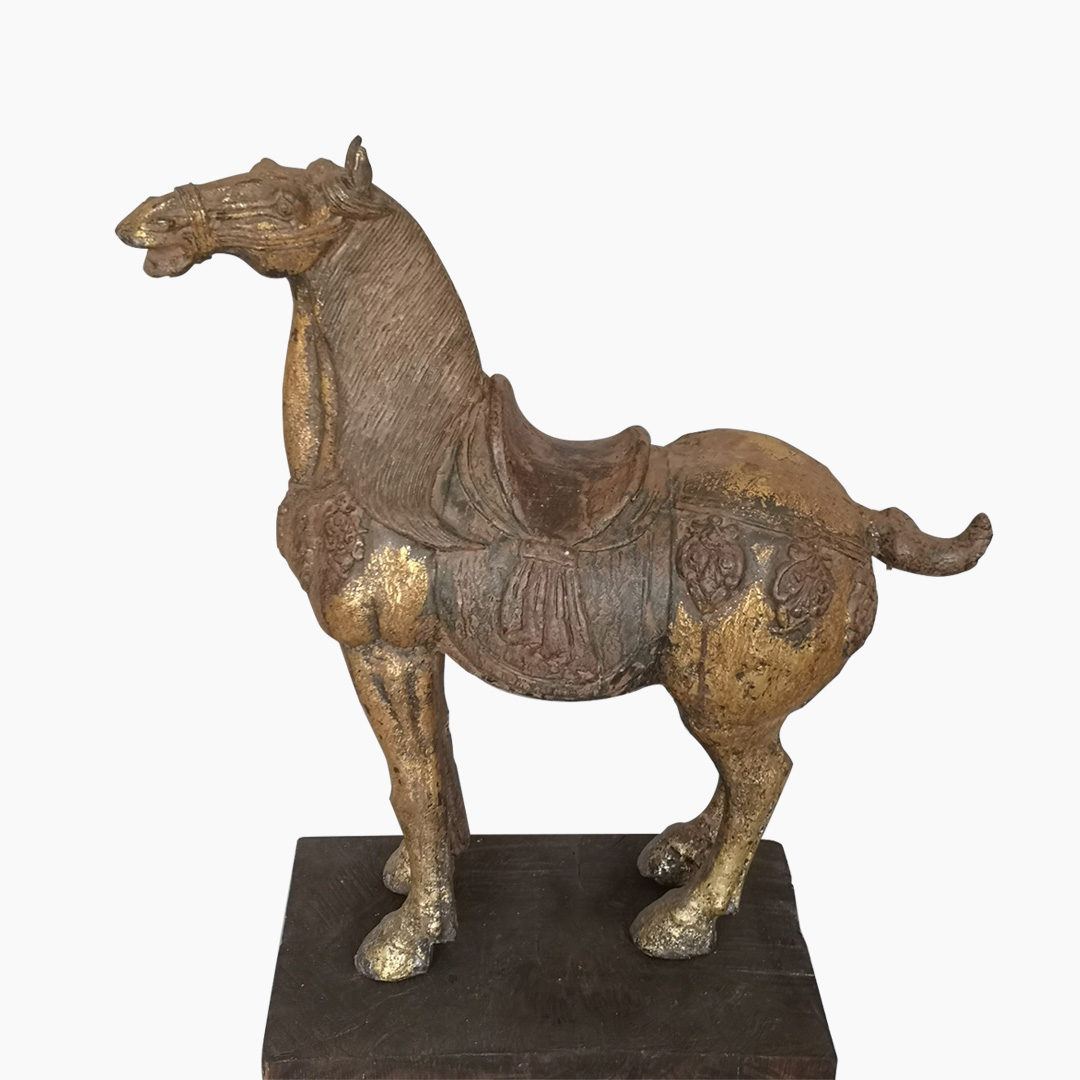 One out of a pair of matched horses 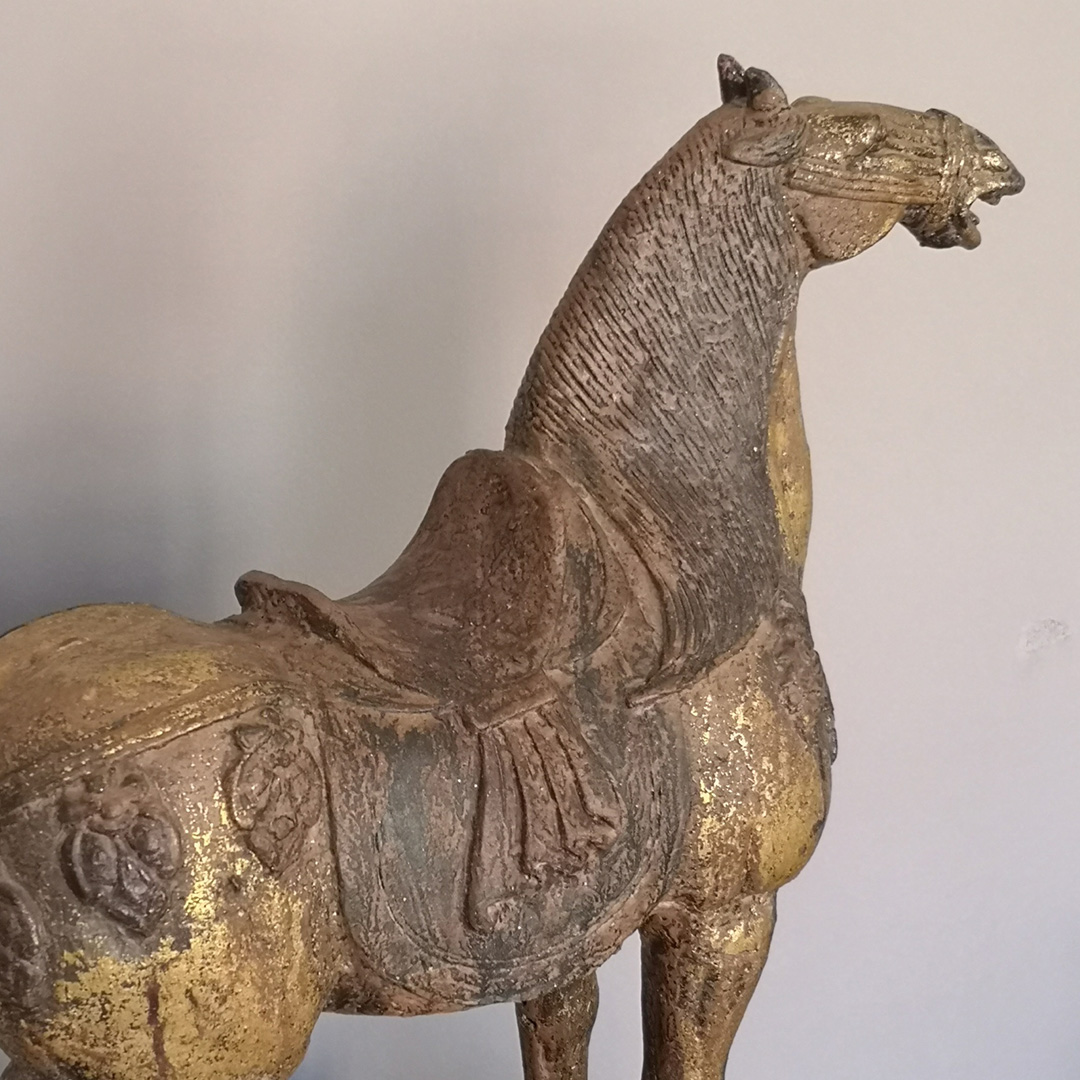 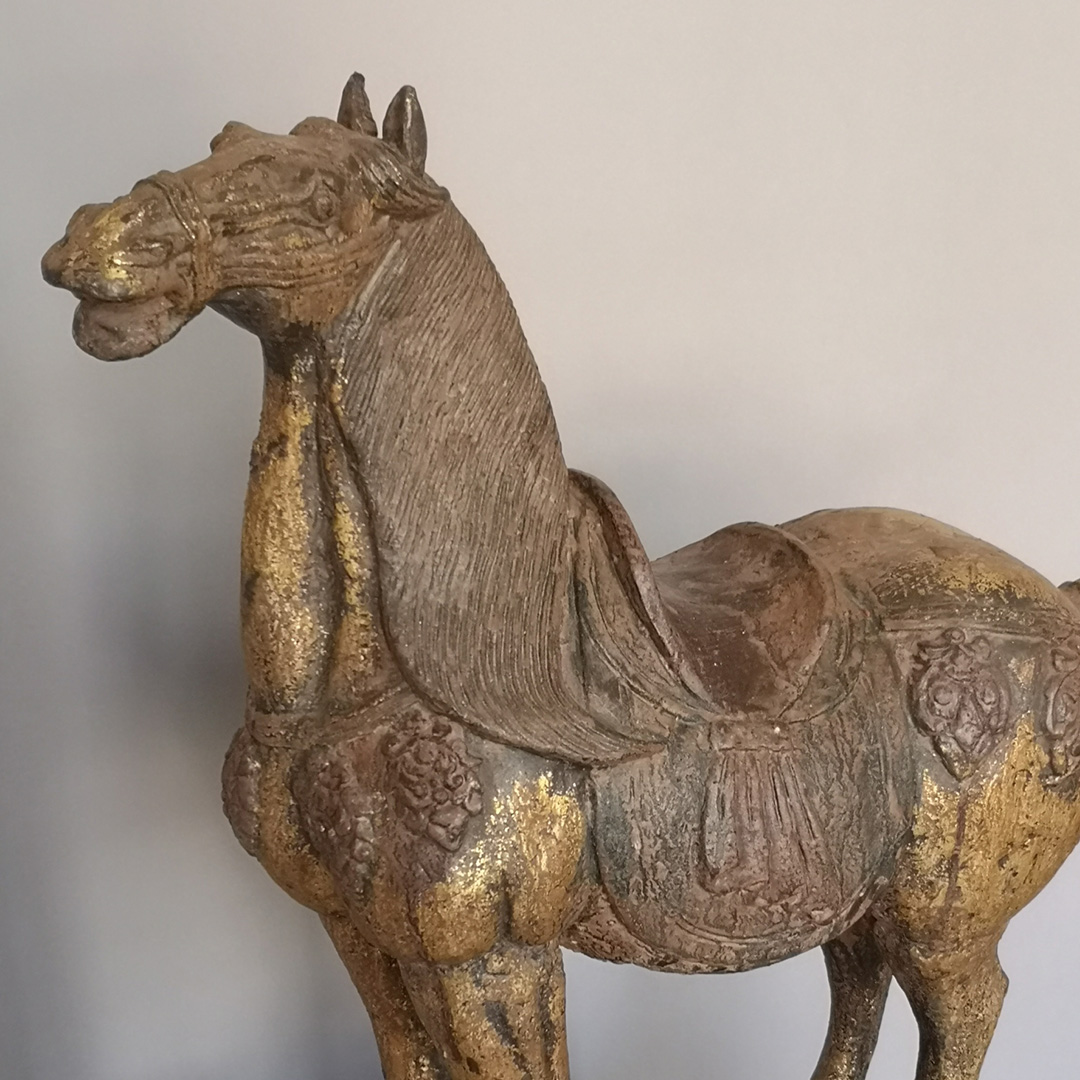 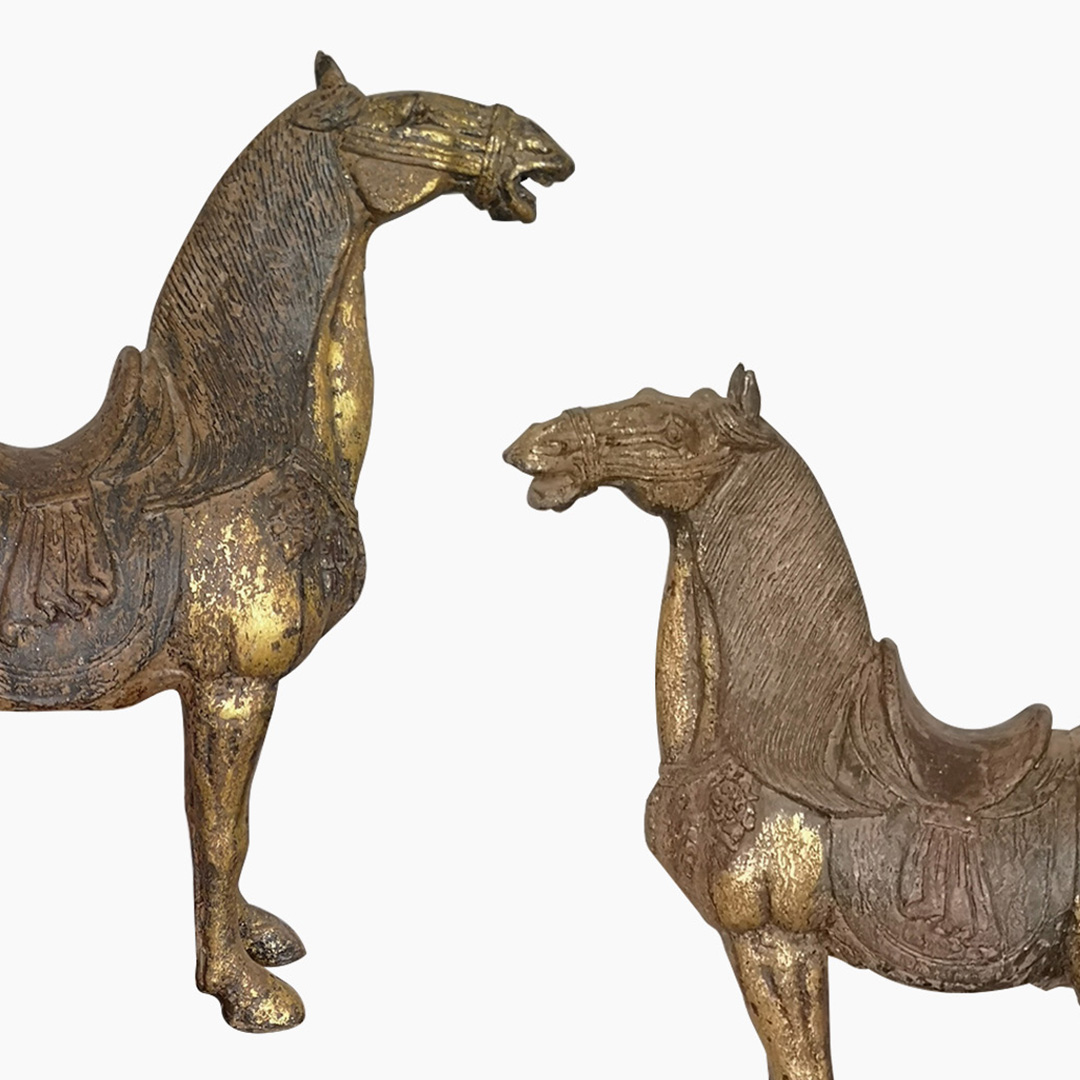 The Tang dynasty (617 – 907 AD) was a highlight of Chinese history when China developed as superpower in the East.The capital of the Tang dynasty, Changan (Xi’an), was the biggest city in the world with a population of more than 1 mn people. In 630, the Emperor Taizong achieved a great victory against the East Turks, and thereby facilitated the extension of China along the Silk Road towards West. That opened the country for all kinds of Western influences including the horse game Polo from Persia. That game became very popular among aristocrats in China. In addition, the Mongols had been feared due to their strong warriors on fast horses. During the Tang period, the ability to own a powerful horse was a testimony of a person's wealth, power and social standing.

Thus, the Tang horse became the symbol for wisdom, power, and endurance. It found his way into the great culture and arts of China. Sculptures of Tang horses have been created by terracotta whose surface was protected against water by coating with a ceramic glaze. Bronze and wood were two other materials commonly used to create sculptures and tomb artefacts in that period and thereafter. However, terracotta was a more practical material because it was more affordable than bronze, and more durable than wood. The sculpturing of horses reached a high level with great attention for its anatomical accuracy.

During the Tang dynasty arts and culture were extremely valued and widespread. Poetry, music, fine arts like painting and sculpturing gained top levels. Technical developments of gun powder, fine terracotta leading to china ware around 700, a ticking water clock in 725, and the first book printing by encarved wood plates in 868. The Diamond Sutra is now acknowledged as the first book of humankind long time before Johannes Gutenberg independently invented book printing by movable metal letters in 1450. The Tang dynasty appeared as an open society. Educated Chinese people followed the social rules of Konfucius (551-479 BC), revealed their standing within nature according to Lao Tzu (6thcentury BC), and developed their spirits along with the teachings of Buddha (563-483 BC). 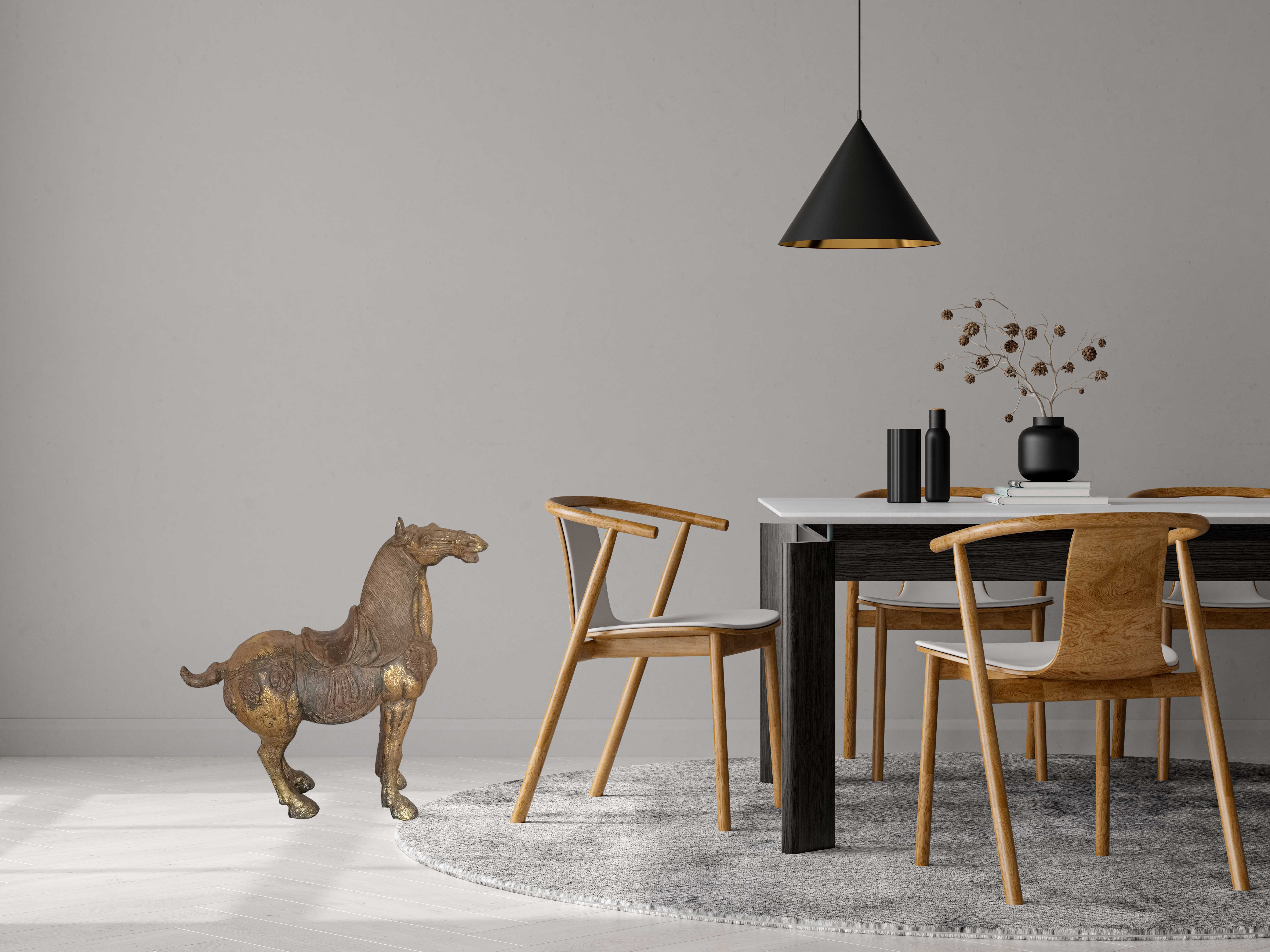